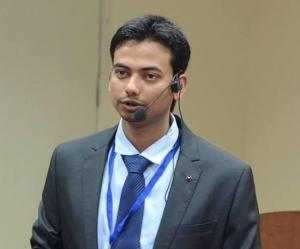 An Indian man has entered the Guinness Book of World Records for finishing one of the longest marathons in the world — and he didn’t have to run even one step.

Arvind Mishra gave a lecture on Scientific Computations from March 1 to March 7 — speaking for 139 hours, 42 minutes and 56 seconds. On April 3, the people at Guinness confirmed that Mishra was the new record-holder for delivering the world’s longest academic lecture.

Mishra is an assistant professor at Graphic Era University.

“There’s a lot I love about being a teacher,” Mishra said. “Teaching is one of the rarest professions that keep your brain young, allowing you to continue your own journey as a student and a lifelong learner. The one who does the teaching is the one who’s doing the learning.”

Now, thanks to more than 135 hours of teaching, Mishra will have his name permanently etched in the record books.

“Sharing knowledge, in my opinion, is a wonderful way of giving back what my gurus have imparted in me,” he said. “The past couple of years at Graphic Era University have been such an enriching experience that I have decided to dedicate my entire life in this process of sharing and learning.”

The previous record was held by Errol Muzawazi. He lectured on Democracy at Jagiellonian University in Poland for 121 hours in 2009.