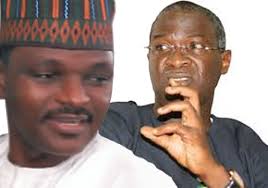 The Attorney-General and Commissioner for Justice, Mr Ade Ipaye made the State government’s position known while addressing journalists during the 2014 Ministerial Press Briefing held at the Lagos State Secretariat, Alausa, Ikeja.

Mr. Ipaye added that the process of appeal had been instituted at the Appeal Court and had from there moved to the Supreme Court.

He reaffirmed that the state is taking the necessary legal steps to ensure diligent prosecution of the matter and approached the Supreme Court after the appellate court refused to entertain the matter on technical grounds.

Recall that in July 2013, the Court of Appeal in Lagos discharged and acquitted Al-Mustapha and Lateef Sofolahan from the murder of Alhaja Kudirat Abiola.

The judgment of the appellate court overturned that of the Lagos High Court which sentenced both men to death by hanging, thereby signaling an end to a dramatic case that spanned 15-years.