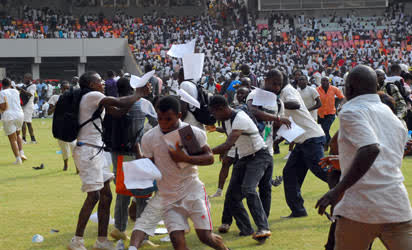 The Chairman of Public Petitions Committee in the House of Representatives, Mr. Uzo Azubuike, yesterday, insisted that the Minister of Interior, Abba Moro and authorities of the National Immigration Service, NIS, must refund the N1000 paid by each applicant that participated in the botched recruitment exercise where more than 18 died across the country.

Azubuike, who spoke at an interactive meeting that was organized by Civil Society Organizations, CSOs, working on rights and governance issues, yesterday, described the recruitment tragedy as a national disgrace.

“It was very unfortunate that the applicants were not only exploited, but ended up losing their lives. How can they ask the applicants to pay N1000 each to participate in the recruitment exercise when funds needed for such exercise was already provided for in the budget.

“You cannot ask a poor Nigerian who has no job and is applying for a job he or she may not even get, to pay. It is a disgrace to the nation that people who came for the exam were struggling for the question papers and not answer sheet,” said Azubuike.

“They were treated like mere objects and not human beings. The National Assembly is already on the matter and we will make sure that justice is done for both the living applicants and the dead ones,” he added.

Azubuike disclosed that the National Assembly had commenced the process of amending the laws that established the Public Complaints Commission with a view to empowering it to fight for the rights of Nigerians.

He regretted that till date, the PCC, still operates under Decree No. 31 which was made by the military in 1975.

“Though that Decree has since been incorporated into the Laws of the Federal Republic of Nigeria as the Public Complaints Commission Act Cap. P 37, LFN, 2004, however, we are going to amend that Decree so as to reform the agency and bring it to conform with the present realities in our current democratic dispensation, without tampering with the security of the Commission in the Constitution”, he added.

Chief Commissioner of the PCC, Justice George Idenyi Uloko, while speaking, stated that the Commission is empowered to conduct proactive and reactive investigation into complaints lodged before it in respect of administrative actions of the Federal, States, Local governments, public institutions and companies incorporated under the Companies and Allied Matters Act, section 5(2) of the PCC Act.