Two men who identified themselves as children of the accused woman who allegedly transformed into a bird on April 21, Wednesday in Ajegunle area of Lagos state have denied accusation that their mother is a witch. 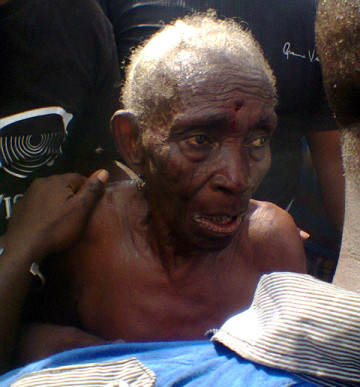 Apparently, the octogenarian who was almost lynched by a mob after confessing to being a witch, according to the two men is said to be have had been missing from home and even lived with them in the Iju Ishaga area of the state but had wandered off some days ago and they had been looking for her only to be shocked on how she got to Ajegunle.

The two sons were said to have gone to the Area B Command Police station on Thursday where she was taken to after seeing their mother’s picture in the newspapers.

A policeman at the command said, “This morning (Thursday), two men came to the command claiming that they were the sons of the woman. The men said their mother was not a witch and were very angry with the manner the rumour was spreading.

“They said they were shocked that youths could attack an old woman in her 80s and they were even asking for justice because the woman sustained bruises on her head.”

The Police Public Relations Officer, Ngozi Braide who had warned Nigerians against taking laws into their hands said the woman was not a witch as spoke on her realease saying:  “Yes she has been released to her son. The family said due to her old age, she was very ill and was brought from Ibadan to Lagos to stay with one of her sons.

“The woman’s daughter-in-law said she went to buy drugs for her nearby, but by the time she returned home, the woman had left the house.”

The traditional ruler of Layeni Community, Bale Rafiu Olayemi, who prevented the woman from being lynched by the mob before the arrival of the police also did not believe the story as he described the report of the bird turned into a woman “unbelievable and impossible”.