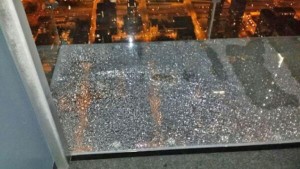 A family from California stepped out onto one of the glass boxes jutting out from the 103rd floor of Chicago’s Willis Tower on Wednesday night when they reportedly heard an odd cracking sound. When they looked down, they realized the iconicSkydeck Ledge had cracked beneath their feet, NBC Chicago first reported.

Opened in 2009, the Ledge allows visitors to step out onto one of four glass balconies that extend 4.3 feet out from the building and look down at the city from a height of 1,353 feet. Each box is composed of 1,500-pound panels that include three layers of half-inch thick glass.

It appears that it was the top layer of the glass enclosure that cracked beneath the tourists’ feet.

However, representatives for the tower assured local publications that the top, protective layer was made to crack, adding that the visitors were never in any danger.

“Occasionally this happens, but that’s because we designed it this way,” spokesman Bill Utter told The Chicago Sun-Times. “Whatever happened last night is a result of the protective coating doing what it’s designed to.”

All four Skydeck Ledge enclosures are currently open for the public. Building management reportedly covered the cracked glass with a carpet but plans to repair the layer Thursday.

“It’s perfectly fine, you can go on it now,” Willis Tower spokesman Randy Stancik toldDNAinfo.com Chicago. “But nobody wants to go on it.”