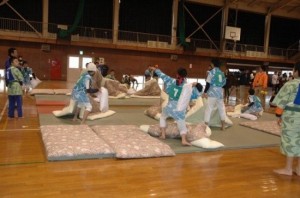 Did you know that pillow fighting is actually a serious sport in Japan? And that there exists a pillow specifically designed to be used in official pillow fights? And that it is the ‘Officially Recognized Pillow by the All Japan Pillow Fighting Association’? I wish I’d known all this sooner. Perhaps I’d have considered moving to Japan to become a professional pillow fighter. Such a cool job.

The association even has official tournaments. Just last weekend, they had an All Japan Pillow Fighting Tournament in Ito City. The participating fee was $20 per team, and they all competed for a grand prize of $1,000. Japanese pillow fighting has its own set of rules: it’s a lot like dodge ball, but fluffier! Each team consists of five members, who have to remain within the team’s court (about 356 square feet) at all times. From the moment the whistle sounds, all they do is throw pillows like crazy, using blankets to shield themselves. Getting hit by a pillow directly sends a player out of the game.

Sounds all right so far, but this is where things get really bizarre. During the match, the referee calls out from time to time: “The teacher is coming!” One of the teams will have to take the cue and lie down immediately, pretending to sleep. One member from the opposite team can walk over and steal as many pillows as he can. Then the game resumes. Doesn’t it sound a lot like the crazy games we invented as kids?

On 28 February, Japanese company Makura Kabushikigaisha released a special pillow designed to be used specifically fr the wacky sport. The name of the company roughly translates as ‘Pillow Corporation’. Priced at $30, the pillow is packed with soft, perfectly weighted, crushed latex. The company claims that the filling is just right – heavy enough to throw and elastic enough not to cause any injuries. The outer fabric is white and gray, making the pillow easy to spot when it’s being hurled right at your face. There aren’t any tags or fasteners either, to avoid injuries. With the new pillow, I suppose Japanese pillow fighting is now the safest sport in the world, apart from being one of the weirdest.

If you want to check out some of the action, don’t miss the YouTube clip below. It sure looks like a lot of fun!