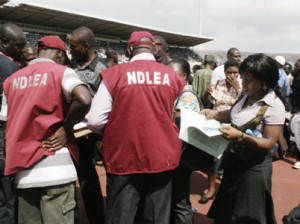 A 35-year-old caterer, Oyinyechi Ezirim, has been arrested in Lagos for attempting to smuggle cannabis popularly called Indian hemp, concealed inside noodles to her boyfriend in prison.

The controlled substance was discovered by officials at the Kirikiri Prison, Lagos, during routine examination of food items brought for inmates.

In her confessional statement, the suspect claimed that her detained boyfriend directed her to a woman to collect two cartons of noodles.

The Lagos State commander of the National Drug Law Enforcement Agency (NDLEA), Mr Aliyu Sule said that the suspect, who was transferred to the State command by the prison authority will soon be charged to court.

“A 35-year-old single lady, Oyinyechi Ezirim was transferred by the Prison authorities for smuggling cannabis to inmates. The compressed dried weeds concealed inside noodles tested positive for cannabis and weighed 4.1kg. She will soon be charged to court”, Aliyu noted.

According to the suspect, “I used to buy noodles for my boyfriend who has been in prison custody for one year. He promised to get married to me and we have been in courtship. Last week, he told me that a former inmate promised to send him two cartons of noodles. He asked me to contact the man on phone. When I did, the man referred me to his wife who gave me the noodles. Unfortunately, when I got to the prison, twenty packs of the noodles were found to contain hemp. That was how I found myself in this case”, Oyinyechi, who hails from Imo State, graduated from the Imo School of Catering.

Chairman/Chief Executive of the NDLEA, Ahmadu Giade while commending the Prison authority said that the case will be thoroughly investigated.

“I commend the Prison authority for the arrest and prompt transfer of the suspect for prosecution”, Mr. Giade said.