Home National News Odd News Pope Francis Says Everybody Has The Right To Be Baptised, Even Aliens
Facebook
Twitter
WhatsApp 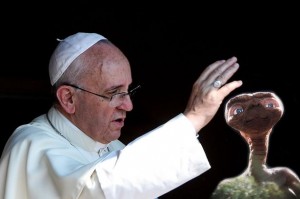 The Pope says he would happily baptise an ALIEN if one wanted to join his flock.

Pope Francis I said little green men would be more than welcome at the Vatican if they should want to convert to Catholicism.

The pontiff was reading a sermon about St Peter christening some pagans which didn’t go down too well with other Bible fans.

But the Pope said he not only agrees with St Peter’s decision to reach out to the heathens but reckons he would also extend his hand to the tentacles of intergalactic non-believers.

The head of the Catholic church said: “If – for example – tomorrow an expedition of Martians came, and some of them came to us, here… Martians, right?

“Green, with that long nose and big ears, just like children paint them… And one says, ‘But I want to be baptised!’ What would happen?”

He said the Bible doesn’t discriminate against anyone, adding, “When the Lord shows us the way, who are we to say, ‘No, Lord, it is not prudent! No, let’s do it this way’. Who are we to close doors?”

While some Christians may disagree with Pope Francis, he is not the only one to reach out to extra-terrestrials.

Vatican scientist Guy Consolmagno said: “Any entity – no matter how many tentacles it has – has a soul.”