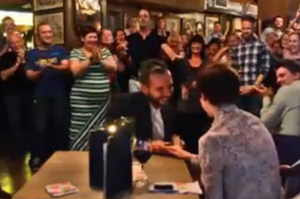 This amazing video shows how a man stunned his girlfriend by proposing to her in the most romantic way imaginable – by hiring a flashmob choir.

Marc Fury wanted to make sure his proposal to partner Naomi Coleman was memorable, so he arranged for the choir to pose as fellow diners when the pair visited Cardiff’s Cosy Club.

The resulting footage is quite spectacular.

Naomi did not clock what was happening as the group slowly began to sing – even remaining oblivious as they slowly started to surround her.

After singing a combination of Bruno Mars’ “Just the Way You Are” and Whitney Houston’s “I Wanna Dance With Somebody”, Marc got down on one knee.

After recovering from the shock, Naomi said yes… to huge cheers, a round of applause and lots of dabbing of eyes.

Marc managed to organise the whole thing for his partner of three years in just three weeks after seeing a flashmob perform at a housing conference in Cardiff.

“I was planning to propose to Naomi and wanted to make it special, something to really remember,” explains the 34-year-old.

“Sing & Inspire’s Llamau choir performed at the conference and it gave me the idea for a flashmob proposal.

“I approached Sing & Inspire, they have a number of choirs from different workplaces and were delighted to get involved.

“When they put the request out, the choir suddenly grew from about 11 to nearly 30. It just grew and grew.”

Marc, from Radyr, Cardiff, admits that he doesn’t remember much of the meal before the choir got up to sing, but the proposal was unforgettable.

“The bit beforehand was all a blur, don’t ask me what I had to eat,” he laughs.

“The cue for the choir to start was for Naomi to stop eating, so I was just watching her and waiting.

“I knew that a lot of the people at the tables around us were part of the choir and I was trying not to make any eye contact with anyone.

“When the choir stood up and started singing around us, Naomi kept saying it looked like they were singing to us, but I said I didn’t have a clue and that it was nothing to do with us.

“She didn’t realise until I got down on one knee. It was an amazing night and we have watched the video over and over again.”

Meanwhile, Naomi, 36, admitted that she is still in shock and has still not completely taken it all in.

“Marc didn’t give a thing away, even when they got up to sing,” she says. “I didn’t realise until I say him reaching into the inside pocket of his jacket. It was incredible, absolutely fabulous.”

Stef Evans, one of the choir motivators for Sing & Inspire, said they often take part in flashmob choirs but this was their first marriage proposal.

She said: “We had a choir with charity homeless charity Llamau and we had a choir sing at a recent conference in City Hall.

“Marc was one of the delegates and he approached us about helping with his marriage proposal. We jumped at the chance to be involved and lots of the members said yes straightaway.

“The Cosy Club were really excited about it too, lots of the staff there wanted to change their shifts to make sure they were there on the night. It was a very exciting, very emotional night.”