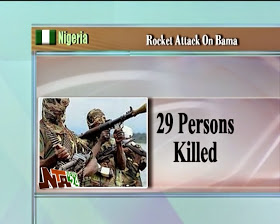 Here’s a breaking news report from NTA. A rocket attack on Soye Village market in Bama LGA of Borno state has left 31 people dead and many injured. Below is how they are reporting it

The number of the dead following the rocket attack on Soye village market near Bama which killed 29 and injured many others has risen to 31. Chairman of Bama local government area, baba Shehu Gulumba has visited the general hospital in the area to sympathize with victims and also made a fifty thousand naira cash donation to a boy who sustained severe burns. Three out of the seven who were injured having died; the remaining four are receiving treatment in Maiduguri while five have already been discharged.