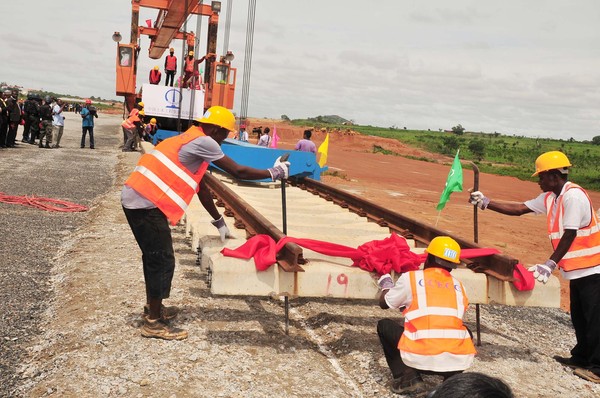 Mr. Umar announced this in Doko, Kaduna State, at a ceremony to mark the attainment of 100km of track-laying for the railway modernisation project.

The Vice President, Namadi Sambo, launched the track-laying at Idu, Abuja, in July 2013.

“Today, in less than one year, the construction has attained over 100km out of 186km. In the next three months, the track will be completed.

“All the materials required are already on ground to achieve the completion and availability of the rail line”, the minister said.

He said the major constraints encountered in the construction were in Abuja and had been overcome.

He said the constraints of water interference at kilometre 19 and some estates built along the rail line in Kubwa were resolved.

Mr. Umar urged the Chinese Civil Engineering Construction Company, CCECC, handling the project to continue with the zeal and determination with which they started.

The Project Manager, CCECC, James Li, said there had been steady progress in the construction of the rail line since the commencement of the track-laying.

He said earthwork site clearing had been done and devoid of obstructions or existing structures; while cutting, including rock blasting and filling were at advanced stages.

“Sub structural works have now been completed on all the 26 railway bridges while all the five box bridges have also been fully completed.

“Also 13 out of more than 30 over-pass bridges have been completed while work is in progress on 16 others”, Mr.  Li said.

He said construction has started on 203 out of the scheduled 206 railway culverts while preparation work was in progress for the commencement of remaining three culverts.

According to the project manager, work has started fully on the seven of the required nine station buildings. (NAN)