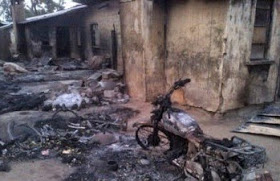 The chairman, caretaker committee of Dikwa Local Government Area of Borno State, Alhaji Ali Modu Gana, has expressed dismay at a media report credited to the British Broadcasting Corporation (BBC) Hausa Service programme on Tuesday, which stated that “some Boko Haram terrorists invaded Dikwa on Monday and set ablaze the council’s secretariat after chasing away security operatives deployed in the area”.

Gana said “there was no Boko Haram attack in Dikwa as carelessly and unprofessionally reported by the BBC, describing the report as baseless, unfounded, untrue and aimed at misleading the public and giving terrorists cheap publicity”.

The council boss, who spoke in Maiduguri, the state capital, also denied the BBC source which claimed to have confirmed the incident from him in an interview.

The source was quoted to have said “the military and other security operatives ran away when the terrorists invaded Dikwa before they set ablaze the council’s secretariat”.

Insisting that no place was attacked as widely reported, Gana said for BBC, one of the respected international media organizations to have concocted a story that did not exist or happen was unfortunate, adding that  “only God knows how many members of the public and the audience would have been misled, misinformed, misguided and faced with media imperialism”.

According to the council boss, what happened in Dikwa on Monday was an explosion caused by faulty solar street light batteries, adding that the report by BBC, without a reporter, correspondent or representative in Borno State for the past few years, was false.