Juan Mata believes his Spain team-mate Diego Costa will “thrive” in the Premier League as he looks set to complete a move to Chelsea.

The striker is expected to join Jose Mourinho’s side in a €43 million move from Atletico Madrid in the near future after he passed a medical with the Premier League giants on Wednesday.

As the move looks imminent, the Manchester United player is sure Costa has what it takes to shine in the English top flight.

“I wish him the best,” Mata told reporters. “He is a forward who is very well suited to English football because of his power and strength. He is the type of player that thrives there, but at the moment he is still an Atletico player.”

Mata was then asked about the World Cup and he says he is elated to be part of the Spain squad again heading into another major tournament.

He said: “I’m over the moon and very proud to have been to two Confederations Cups, a World Cup and a European Championship and now I’m getting ready to experience another World Cup.

“I’m proud to be part of the most historic period in our national team’s history. I’m raring to contribute and to keep enjoying this moment; here’s hoping we keep making history.”

He then turned his attention to his side’s friendly against El Salvador on Saturday.

“Hopefully they take the match 100 per cent seriously, as if it were a final. Over the last few years all of Spain’s opponents in friendlies have approached them like a competitive fixture. Now we have to do the same thing to prepare for the World Cup.

“Like all warm-up games, it will allow us to continue getting into our stride. We’re training hard, both in the morning and in the evening; let’s hope there are no injuries, that we play well and build up confidence ahead of the World Cup, which is the whole point of these matches.”{GOAL} 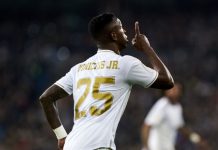