Two teens died after falling from a sixth floor balcony while having sex in London, UK. 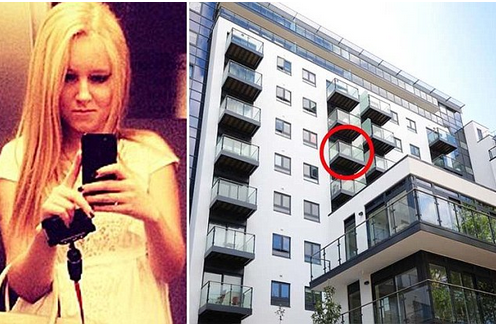 Two students were kissing and cuddling when suddenly they lost balance, fell more than from 20m and died instantly

The incident occurred during a party dedicated to the end of exams. The students were having fun in a luxurious apartment while the pair secluded on the ill-fated balcony.

According to the eyewitnesses, a 19-year-old Anastasia and her 18-year-old friend Miguel were kissing and cuddling when suddenly they lost balance, fell more than from 20m and died instantly from catastrophic injuries.

You could see they were doing some really dangerous stuff. The last thing I expected was to see them falling down. We just screamed,” one of the neighbours said.

He ran to the scene and discovered both teenagers lying dead in a pool of blood on a stone patio. He dialled 999 but paramedics could do nothing to save either teenager. Their drunk friends were hysterical and crying after they saw their mates bodies lying on the ground.

The families of both students were informed of the tragic incident, they have already flown to London. The case is under investigation.