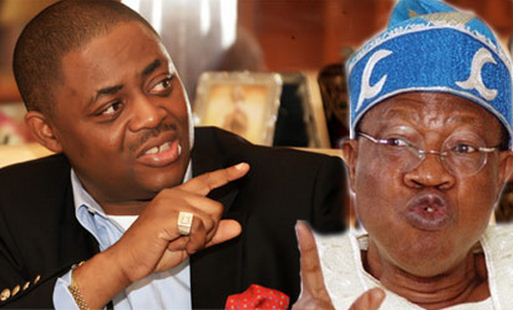 Following an emotional response by former Aviation Minister Femi Fani-Kayode to a statement by the All Progressives Congress (APC), the party has once again accused him of lying and distorting facts.

In a statement released in Abuja on Wednesday by APC National Publicity Secretary, Alhaji Lai Mohammed, the party said Fani-Kayode was distorting facts to reach a prepossessed conclusion on the party’s comments concerning the proscription of Boko Haram by the Federal Government, adding that his response repudiated everything he ever said he stood for.

The party said his response failed to wash off the thick mud he splashed on himself when he returned to his vomit and made himself a tool, used for criticising the opposition, Vanguard reports.

Describing Fani-Kayode as a Janus-faced, brassy personality who stands for nothing and will fall for anything, the party said they would expose him for who he truly is, adding that they would not engage in brickbats with him but simply set the record straight for the sake of posterity.

The statement reads in part: “On June 9th 2013, the ACN issued a statement in which it said in the opening paragraph ‘The Action Congress of Nigeria (ACN) has said that the recent proscription order against Boko Haram and Ansaru, desirable as it may be in tackling the terrorist organisations, violates the Constitution of the Federal Republic of Nigeria by stifling the press and tampering with the fundamental human rights of Nigerians.

“Any person, especially one who supposedly had the benefit of a sound education, who interprets this statement as a condemnation of the proscription itself is either acting out of deliberate mischief or has failed to take advantage of his good education, perhaps in a desperation to escape justice at all cost.”

Fani Kayode, while speaking on Channels TV’s breakfast show, Sunrise Daily, had claimed that Boko Haram was the armed wing of the APC and its leaders of being supportive and sympathetic of the dreaded sect.

The APC, who disowned Femi-Fani Kayode as a member earlier in June 2014, had asked him to retract his comment or face a legal action.

However, the former Aviation Minister had replied that he would not apologise and “hell will freeze over” before he issues Lai Mohammed or the APC any type of apology for what he said, adding that he looked forward to seeing them in court.