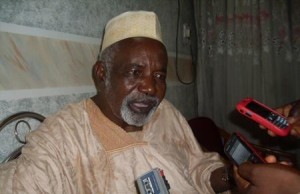 Ahead of the 2015 general elections, former governor of Kaduna State, Alh. Balarabe Musa has said that peaceful democratic revolution in the political system would be required to guarantee free, fair and credible elections in the country.

According to him, unless the electorates decide to tow the path of such peaceful revolution, the dream of having their desired leaders voted into office might never materialize.

The elder statesman, who is the national chairman of the deregistered Peoples Redemption Party (PRP), said PRP would continue to advance the cause of the downtrodden in society.

Musa, who spoke while fielding questions from newsmen yesterday shortly after meeting with members of the national executive committee of the party to find alternative political strategies for the party following its deregistration by INEC, lamented that the country’s political system has been hijacked by money bags, stressing that the hope of the people getting credible leaders through their votes is almost an impossible task.

Musa, who holds the unenviable record of being the first governor to be impeached in Nigeria, listed social, moral, coup staging, and constitutional types of revolutions Nigerians could choose from to ensure the enthronement of credible leadership in the country come 2015.