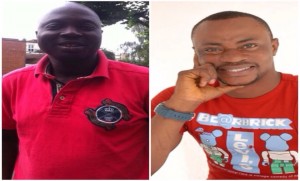 He disclosed to Encomium in a recent chat that the story was fabricated.

Mr Latin who further described it as a figment of people’s imagination, called on those sponsoring it to stop misleading and misinforming the general public as there is no iota of truth in the publication.

His colleague, Odunlade-Adekola also speaking with Encomium, also expressed total dissatisfaction about the report, calling on the public to disregard it out-rightly as there is no rancor whatsoever between himself and Adekola, who he described as one of his closest guys and colleague. He further labeled those behind the report as mischief makers.

According to Mr Latin, “That’s not true at all. And I am sure you too know. Some people had called me on it to find out whether Odunlade Adekola and I are truly fighting over Glo ambassador of a thing. I just laughed because I am sure they don’t understand how Odunlade Adekola and I are close. They don’t understand the kind of cordial relationship between the two of us. That’s why they are fuelling that kind of speculation.

“I am disappointed in the way some people use social media in creating confusion and causing unnecessary rancour, breaking other people’s relationship. It’s unfair. It should be used as an instrument to create, not to destroy. I wonder how some people get their information. They will just sit somewhere and start circulating fake information. What are they gaining from such a thing? I believe they don’t know how close both of us are, that’s why they’re fuelling that kind of stupid speculation.

“For your information, Odunlade is my very close guy, brother, friend and colleague. Even, I just finished from his movie location a few days ago. We were together throughout.

“In the first place, how can we quarrel over Glo ambassador deal? Are we part of the people who decide who should represent the company? My being one of the ambassadors of the company right now does not have anything to do with Odunlade. So, people are just peddling unnecessary rumour, a kind of rumour that has no head or tail. Everybody is aware of how Glo does its thing. No one can influence their decision when it comes to who will be the ambassador of the brand for certain period. Nobody can lobby for it. You will surely be contacted when it’s your time. I didn’t know anybody there.

“I believe people are just fabricating the story because I am based in Ogun where Odunlade is also based. It’s just a kind of imagination by mischief makers. There is nothing like quarrel between Odunlade and I.”

Asked to shed light on the amount he smiled home with as a new ambassador of the telecoms giant, he reacted, “Don’t worry my brother. I will give you details when I am ready to grant you a full interview on it. But the only thing I can tell you now is that it’s true I am one of the ambassadors of Globacom Telecommunication Company right now, and I am very grateful to God about that.”