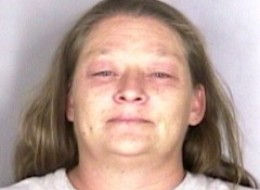 An Oregon woman accused of setting her husband on fire because of an argument over weed killer is jailed on an attempted murder charge.

KPTV reports an officer on patrol Friday evening saw the woman and man outside their Mount Angel home and initially thought there had been an accident with a barbecue.

The man, 43-year-old Timothy Bork, was flown to Legacy Emanuel Medical Center in Portland with burns to his face and chest that covered 15 percent of his body.

Court papers say his wife, 45-year-old Toddi Bork, confronted him over spraying poison on weeds that could have sickened her dogs. She told police she doused him with gasoline and set the fire to get his attention. Her lawyer did not immediately return a call Tuesday.

Share
Facebook
Twitter
WhatsApp
Previous articleWanted Man Crashes Car Into Police Hunting for Him
Next articleMan Killed By Stray Bullet While Playing Computer Game On His Birthday
- Advertisement - Ad ==> TRUTH FINALLY OUT! Discover how a young Nigerian graduate now makes a consistent 40k per week doing a legitimate online business. You too can start yours now, click here!!!