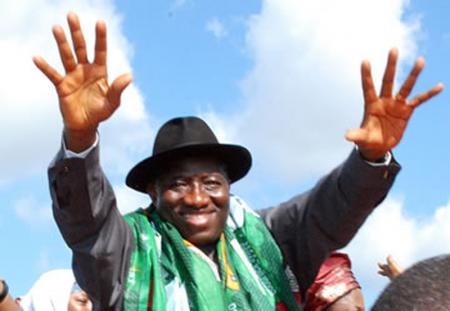 Ahead of his formal declaration for a second term in office, President Goodluck Jonathan said Thursday he was “humbled and overwhelmed” by the decision of his party, the Peoples Democratic Party, PDP, to endorse him as the sole candidate for the 2015 presidential election.

The president said he will not disappoint the party that trusted him well enough to offer the mandate, and promised to raise the bar of his performance if “re-elected”.

Mr. Jonathan was reacting to his endorsement by the party’s National Executive Committee, NEC, the governors and the Board of Trustees, between Wednesday and Thursday.

Rising from its 66th NEC meeting Thursday at Wadata Plaza, National Secretariat of the Party, the NEC, which is the party’s highest organ, explained that the move became imperative because no serious party would change a winning team like President Jonathan who has performed with his transformation agenda, which has changed the face and well-being of Nigerians.

Similarly, prior to the adoption of President Jonathan by NEC, the PDP Governors Forum, after a meeting held on Wednesday at the Akwa Ibom Governor’s Lodge, Asokoro, unanimously endorsed President Jonathan as the party’s sole candidate for next year’s election without any dissenting voice.

Speaking for the first time on the endorsements, President Jonathan said: “Let me really say that the events of yesterday, starting with BoT meeting last night and what has just happened today, with the various motions adopting me as sole candidate of the party has really humbled me.

“Let me specially thank our governors that initiated that action, let me thank members of BoT, let me thank the senate president and members of the National Assembly, let me appreciate the PDP women for their position and the NEC, because no matter whatever anybody does, if NEC, you will be on your own.

“Adopting me as the sole candidate of the party has humbled me; I am totally overwhelmed. When the governors came up in a jointly signed paper, though House of Representatives started it, governors intervention was like an atomic bomb, I commend all departments of the NEC.

“I am so overwhelmed that I lack words to express myslef. I leave it for another day. For today, for you to have that kind of confidence, I am extremely challenged. It means that whatever we had done in the past three years, we tripple it. That is the only way Nigerians will appreciate it. I promise I will not disappoint you”.

Presidential Candidate Who Ran Against Buhari In 2019 Joins APC