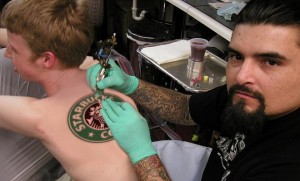 A man said that he hopes to make a large sum of money by selling his arm space for a permanent tattoo, according to a listing posted on ebay in the United Kingdom.

23-year-old Jtorking1 of New Mills, Derbyshire, is hoping to raise funds for the Motor Neurone Disease Association and a charity chosen by the buyer, in exchange for getting three square inches of tattoo space on his arm.

The buyer will be able to choose any tattoo except something that is deemed perverted. “It will be there for years, plus you can remove and put it on display when I die.” the seller noted.

Neurodegenerative disease, also known ALS, has been in the news recently because of the ALS Ice Bucket Challenge that spread across the globe.