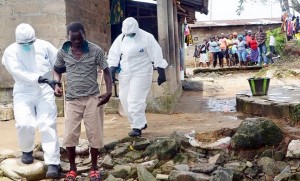 Panic is spreading across an African community after reports that two Ebola victims have risen from the dead.

The victims, both females in their 40s and 60s, died of the deadly virus in separate communities in Nimba County, Liberia.

But according to reports in a local newspaper, the pair have reportedly been resurrected and are now walking among the living, causing panic and fear among locals.

The New Dawn Nimba County said the late Dorris Quoi of Hope Village Community and the second victim identified as Ma Kebeh, in her late 60s, were about to be taken for burial when they rose from the dead.

Ma Kebeh had been indoors for two nights without food and medication before her alleged death.

Nimba County has recently reported unusual news of Ebola cases, including one about a native doctor from the county, who claimed that he could cure infected victims, dying of the virus himself last week.

Since the Ebola outbreak in Nimba County, this is the first incident of dead victims resurrecting, the paper said.

The Ebola outbreak has already killed around 2,800 people in five West African countries this year while an estimated 5,800 people have been infected with the virus, which has no known cure.

America’s respected Centres for Disease Control and Prevention has predicted there could be up to 1.4million cases of deadly Ebola by the end of January.

The CDC, which successfully treated two US doctors infected with the disease, released the worrying report based on assumptions that cases have been dramatically under reported.

The Centre’s scientists believe there may be as many as 21,000 reported and unreported cases in just Liberia and Sierra Leone alone by the end of this month.

The World Health Organisation has already warned the number of people infected with the Ebola could reach 20,000 by the beginning of November if steps to contain the outbreak are not accelerated.