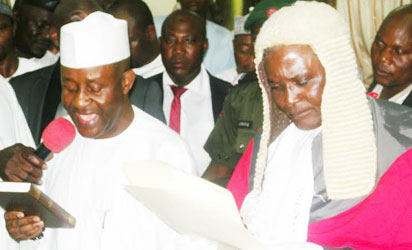 Governor Bala Ngilari of Adamawa on Friday swore in Justice Ishaya Banu as new Acting Chief Judge of the state.

Mr. Ngilari said the Judiciary arm of government remains the only system that continues to maintain its integrity as it strives to strengthen democracy in the country.

“Judiciary as you know is the last hope of masses as well as government. Therefore, the Judiciary must continue to ensure that it upholds the right position in the decision making in the process of growing democracy”, he said.

He said the appointment of the new acting chief judge was on merit following his track record of excellence in the discharge of his duties and career in the judiciary.

Mr. Ngilari said the state’s quota at the federal judiciary level were still vacant and urged the state judiciary to work towards filling the vacant slots as a matter of urgency.

“We have eminent people that deserve to be there”, Mr. Ngilari said.

The governor assured the appointee of maximum cooperation of his government and said the judiciary will allow the system function effectively.

In his acceptance speech, Mr. Banu thanked God and the Adamawa Government for finding him worthy to serve his people.

He promised to abide by the rules and regulations of the judiciary and to avoid any act capable of tarnishing its image as well as ensuring discipline in the system.