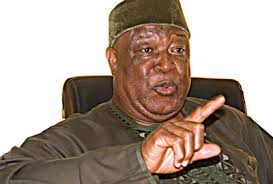 A former National Chairman of the Peoples Democratic Party, now Senator representing Benue North-East Senatorial District of Benue State in the National Assembly, Chief Barnabas Gemade, has expressed the confidence that he will floor his co-challenger for the PDP ticket to contest the senatorial election in 2015, Governor Gabriel Suswam.

Gemade said it would be impossible for Suswam to defeat in the forthcoming senatorial primary, adding that the Benue governor’s entry to the race would be one of political lessons, where he (Gemade) is the teacher.

The senator made this known in a parley with journalists at the national headquarters of PDP in Abuja on Friday after he picked up his nomination form.

Speaking further, the ex-PDP national chairman said he was not afraid of confronting the governor, adding that he had faced similar challenges in the past but emerged victorious in the end.

Gemade, who was brimming with smiles as he brandished his newly collected forms before journalists, added that he would do all that was within his power to make  the race uncomfortable “to Suswam should he insist on contesting the seat and emerge the candidate for the position in 2015”.

He added, “Everybody knows that the purchase of forms for 2015 has commenced today and knowing my way around this way because I used to work here before, I knew how to come here quickly and purchase my forms.

“That is why I am one of the first to buy nomination and expression of interest forms for the Senate in 2015.

“I am the current senator representing Benue North East District and I am going back in 2015. That is why I have come here.

“So many people have come to me and said ‘wow! Can you stand the governor?’ Of course, yes, I have stood many before. I will stand this one too”, he stated.