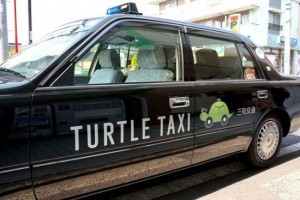 Unlike most other taxi services, the Japanese Turtle Taxi caters to people who aren’t really in a hurry and prefer a leisurely ride. Surprisingly, there are many who enjoy a service that is deliberately slow – the unique taxi has been steadily growing in popularity ever since it started in December 2013.

The taxi service was created by the Sanwa Kotsu Group – they’ve designated 10 of their 500 cabs in Yokohama as ‘turtle taxis’, and specifically trained cab drivers to accelerate and decelerate as gently as possible. They’ve also been told to manage the ‘centrifugal forces’, to avoid making sharp turns.

When a customer gets into a Turtle Taxi, they have to press a button labelled ‘Yukkuri’ (which means slow). This will activate a musical chime and a plastic visual reminder with the illustration of a turtle – to let the driver know that the drive has got to be a slow one.

The service is quite popular in Japan with senior citizens, pregnant women, mothers with young children, and tourists who would like to take in more of the city while commuting. “The starts and stops are very smooth because there is no jarring movement,” said a customer with a one-year-old baby. “It is perfect for those times when I don’t want to have my sleeping child woken up.”

The Turtle Taxi has received tremendous positive feedback – the number of requests for the service have gone up by 15 percent in the past year. The company now has plans to implement the system in all of its cabs next year and extend the service to other cities like Tokyo, Kanagawa, and Saitama.