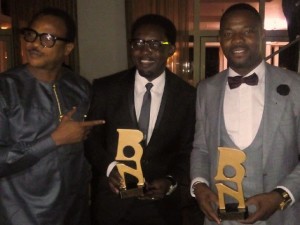 More  drama and controversy continues to trail the Best Of Nollywood Awards (BON) held in Port Harcourt, Rivers State on Thursday, October 16, 2014, after actor and producer, Elvis Chuks said some Nollywood figures were not treated with respect and courtesy, lashing out at Governor Amaechi and the award organizers in the process.

The main organizer of the awards, Seun Oloketuyi has responded, hitting back at Elvis Chuks and blogger Linda Ikeji.

Comedian Okey Bakassi has joined those making their voices heard on the matter, addressing reports flying around about Governor Rotimi Chibuike Amaechi’s speech at the event.

He said: ‘The Best of Nollywood Awards in Port Harcourt on Thursday, 16-10-14 was a success. Except a few technical problems, the event was fun. It was good to meet show biz and media friends. I got the Award for Best Movie Actor(Igbo). Thanks to the organizers of B.O.N Awards. I appreciate the level of support the Rivers State Government gave the Organizers and thanks to Gov Chibuike Amaechi for staying up with Nollywood till about 2 am when the event ended. What is shocking to me is reading in the blog the next day that Gov Amaechi insulted Nollywood. A story that is false and completely taken out of context.

It’s either the author of the mischievous story didn’t attend the event or went with a different agenda. I hate when people vilify genuine supporters of Nollywood just to score cheap political goals.

Gov Amaechi’s speech, which was applauded by all present, highlighted how Nollywood evolved from the determined efforts of practitioners. He stated how Nollywood has created jobs for thousands of Nigerians seeking employment. He explained how most actors were products of necessity and survival….how people where able to reinvent themselves after graduating without jobs. He even used his personal experience to buttress his points and encouraged actors to become  agents for Change.

I love the freedom of expression that social media has provided but people must be responsible enough not to abuse it.

I do not know if the wicked publication was targeted at the organizers of the Awards, Actors or Gov Amaechi but I know for sure that it is a misrepresentation of facts and it’s mischievous. God help Nollywood.’