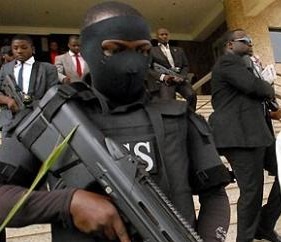 The Department of State Security (DSS) in Benue State has warned that the forthcoming elections in the state would be bloody if the illegal arms in circulation are not withdrawn.

According to the DSS, the quantity of firearms in circulation, as a result of the frequent farmers/herders clash in the state recently, is a cause for concern and poses a serious threat to the 2015 2015 elections.

Deputy Director of the Service, Frank Obi, who voiced this concern at a meeting organized by the National Orientation Agency (NOA) in Makurdi, the Benue State capital, stressed the need to address the issue to ensure a peaceful election next year.

Speaking on the illegal arms in circulation, Mr. Obi said: “Nobody is worried about retrieving them. The arms are mostly in the possession of youths and must be totally mopped up in-order for next year’s elections not to be turned into a battle field”.

Earlier, the state director of NOA, Andy Yough, said the meeting was aimed at ensuring that communities in the state are properly secured during the 2015 elections.