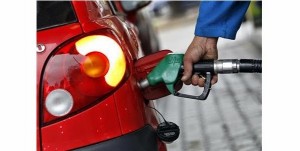 Lagos State Governor Babatunde Fashola Saturday canvassed a slash in the pump prices of oil products as global oil prices continue declining. He wondered why the government has said nothing about reducing fuel price as the price of the raw material used in producing it has dropped significantly.

“While this has reduced, the pump price of fuel in the country still remains the same. Then something is wrong. If the price increases in the country when the price of oil goes up globally, then it should also reduce when the price of oil drops,” said Fashola at the After School Graduation Development Centre (AGDC) held at Oregun, Ikeja, Lagos State capital. AGDC is chaired by Mrs. Ibukun Awosika, CEO Sokoa Nigeria Ltd.

“I understand I am not an economist; the federal government are the economists. But I have some logic and common sense to ask critical questions. For instance, if one buys flour at N10 per kilogramme, and the bread was sold at N1 per loaf; if the price of flour drops, the price of the bread should also change,” he argued.

Fashola urged the administration of President Goodluck Jonathan to follow the footstep of other countries that have reduced the pump price of oil products for their citizens as a result of declining oil prices.

The governor also lamented that the country’s oil sector “have not been improved to address challenges confronting the nation especially unemployment.” He added that the economy is not doing well. “Some of you are compelled to try to survive through whatever means.”

According to him, the oil sector would have addressed the unemployment challenges, if the country had “built refinery with Dangote in LFZ. Its construction alone will require 8,000 workers. It means that they must get to work and back. So there is need for transportation service. There is need for food and other services during work, and post construction.

“So if we stop importing fuel, and start building refineries and doing other right things. The economy will lift. If you build a gas grid for the country and rough estimate indicated that investing $5 billion, many businesses will begin to get gas and some of the power installations can also convert to gas and others, there would be sudden positive effect on the country’s economy.

“We will not be here talking about youth unemployment if the economy was doing well. There are so many businesses that are already shut down today because of either there was no power and the operational costs have made their product expensive. It has made it for many companies to succeed.

“From the maintenance contracts that we issue, 40 per cent of those maintenance cost were spent on buying diesel. One could imagine what that fund would have done if power was constant. That is depressing,” he said.