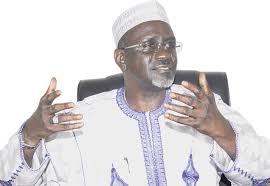 The National Association of Nigerian Students (NANS), has declared total war against the Minister of Education, Mallam Ibrahim Shekarau and has called on President Goodluck Jonathan to immediately relieve him of his appointment over it referred to as dishonorable actions.

The association stated that “this leadership of NANS rejects Dr Ibrahim Shekarau as the minister of education. We cannot work with a minister who sponsors impersonation of one of our key officers and who has shown open unwarranted hostility towards the legitimate leadership of NANS. We therefore call on our father and leaders, President Goodluck Jonathan to sack him immediately”.

The umbrella body for Nigerian students of tertiary institutions made the demand on Tuesday during a press conference through its president, Comrade Tijani Usman Shehu and vowed that “From Thursday, December 4th 2014, NANS will occupy the ministry of education until Dr Ibrahim Shekarau is removed”.

NANS, which promised to tackle the minister “ferociously and squarely in order to preserve the dignity of the association‎”, alleged that Mr. Shekarau gave a sum of $120,000, about N19, 200, 000 million to one aspirant, Comrade Ali Wali, who is from his home state, Kano, therefore, “by this action, the minister, who should be a father to all, took sides”.

The association, which claims not to be bothered with the minister’s partisan politics and which also claimed to try to reach him but all to no avail, further alleged that the huge sum was squandered by Comrade Wali, who later withdrew from the race ‎but yet, was backed by the minister to declare himself as the secretary general and “continues to encourage impersonation in NANS”.

The NANS president stated that despite efforts made by convention chairman who conducted the elections and the Senior Special Assistants to the President on Youth and Student Affairs, Comrades Igwe Ude-Umanta and Jude Imagwe respectively, the minister “has also further in expression of his anger and hostility towards the genuine leadership of NANS, shut his door against an organisation that he is expected to supervise”.

An aide of the minister, Sule Ya’u Sule, who reacted to the allegations, said there was no iota of truth in it. “We do not even know anything about it. In fact, the NANS election was conducted even before the tenure of the minister. Some people are only been used to disrupt the existing peace and should be ignored”, he said.