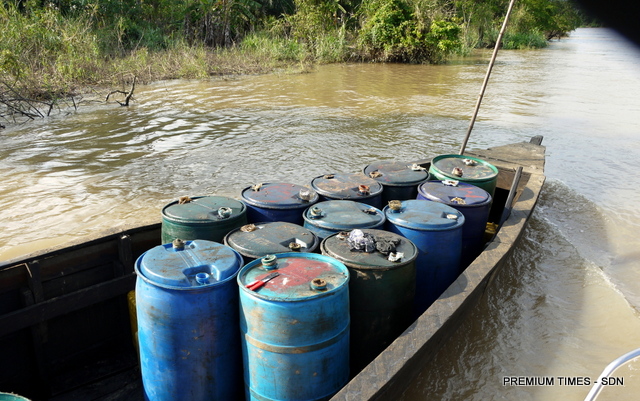 The Nigerian Navy on Monday handed over 12 suspected oil thieves to the Nigerian Security and Civil Defence Corps, NSCDC.

The suspects were arrested for allegedly stealing 161, 280 litres of diesel worth N30m in Asari-Toru Local Government Area of Rivers State.

The Base Operations Officer of the Navy Ship Pathfinder, Port Harcourt, Commander Chindo Yahaya, who also handed over a barge, three wooden boats, a tug boat and 172 drums of diesel to the NSCDC, said the suspects were apprehended at different locations in the area.

Yahaya explained that the barge named MV Saviour was filled with 120,000 litres of diesel, adding that the wooden boat contained 172 drums and 41,280 litres of stolen diesel.

He said the barge, MV Saviour, contained 120, 000 litres of diesel, while the wooden boats carried a combined capacity of 41, 280 litres of stolen diesel filled into 172 drums.

“On November 25, we went on patrol along Alakiri creek in Asari-Toru Local Government Area based on intelligence report of the presence of two barges; a tug boat and some speed boats lifting crude oil and illegally refined AGO (diesel).

“On arriving at Alakiri creek; the patrol team intercepted a tug boat and a barge with five suspects. Also, on December 1, based on intelligence report, we intercepted three wooden boats loaded with about 172 drums containing substance suspected to be illegally refined AGO at Iyalama creek.

“Upon interrogation, they (suspects) were unable to offer any convincing answers and as such, we have to hand them over to the NSCDC for detailed investigation and prosecution”, Yahaya said.

The Base Operations Officer, however, assured that the Nigerian Navy would not relent in its fight against crime on the nation’s waterways.

Yahaya also pointed out that the efforts of the security outfits had reduced the rate of oil theft and pipeline vandalization in the country.

Receiving the suspects, the state NSCDC Deputy Commandant, Mrs. Christy Abiakam, promised a thorough investigation of the suspects and promised to prosecute any of them found culpable.