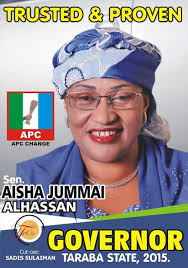 A serving female senator, Aisha Alhassan, has been elected as the governorship candidate of the All Progressives Congress in Taraba State, at the party’s primary held on Thursday and rounded off on Friday morning.

If Senator Alhassan, who represents Taraba North at the National Assembly goes on to win the forthcoming governorship poll in the state, she will go into the history books as the first elected female governor of a state in Nigeria.

Chairman of the APC primary committee in the state, Kola Shittu, who announced the results of the election in the presence of party members and other officials, stated that delegates cast 2,471 votes at the primary.

However, it was learnt that three aspirants – Dr. Muhammed Julde, M. T. Tumba and Yusufu Akirikwen – boycotted the primary shortly before the commencement of the exercise.

A breakdown of the votes cast for the various aspirants indicate that Alhassan polled a total of 2, 425 votes to floor Julde and Akirikwen, who scored 14 votes respectively. Tumba got 18 votes.

Declaring her winner, Mr. Shittu said, “With this results and the power conferred on me as the returning officer of this primary held on December 4 2014, Sen. Aisha Alhassan, having satisfied all the necessary requirements and scored the highest votes, is hereby declared the winner of this primary”.