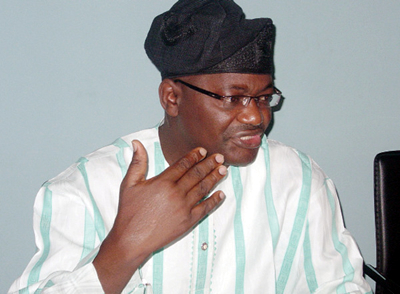 The governorship candidate of the Peoples Democratic Party in Ogun State for the 2015 election, Gboyega Isiaka, has described a former Speaker of the House of Representatives, Dimeji Bankole, as an alien to the state’s politics, who is attempting to reap where he did not sow.

The PDP flag bearer stated this on Wednesday in a statement by his campaign organisation, Gboyega Nasir Isiaka Campaign Organisation, in Abeokuta, the Ogun State capital.

Isiaka’s statement was in response to Bankole’s outburst of Tuesday, where he had called the PDP governorship candidate “a fake product of an unauthorised primary election”.

Isiaka, in the statement by GNICO director of media, Mr. Ifekayode Akinbode, noted that unlike what Bankole had alleged, he emerged the flag bearer of the party in a free and fair primary.

He, therefore, advised the former speaker and his supporters to stop hallucinating and wake up to the reality on the ground.

He said, “It is unfortunate that the Dimeji Bankole Movement has descended to the abyss of hallucination by this offensive statement, which to all discerning mind, is a desperate attempt to break into the peaceful PDP house through the roof.

“Let it be stated that Dimeji Bankole is an alien in Ogun PDP today as he has never participated nor identified with the party in all its processes between 2011 and now, only to wake up from his deep slumber few weeks back to want to pick the biggest position on offer through the backdoor and in the process showing crass disdain for the party in Ogun state”.

Akinbode, who stressed that none of the legitimate aspirants known to Ogun PDP, had complained about the process except the ex-speaker, added that the primary was valid and followed all extant party and Independent National Electoral Commission guidelines.