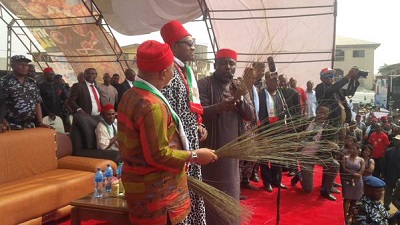 Governor Rochas Okorocha of Imo State has said the South East geo-political zone will produce the president of Nigeria after 2019.

The governor stated this yesterday while speaking at the All Progressives Congress, APC, presidential campaign rally in Aba, Abia State.

The South-East, which comprises of five states, namely Abia, Enugu, Anambra, Imo and Ebonyi, is yet to produce a democratically-elected leader of the country.

However, an indigene of the zone, the late Maj.-Gen. Johnson Aguiyi-Ironsi, was Nigeria’s first military head of state.

He ruled the country between January and July, 1966, before he was overthrown in a bloody coup that brought a northerner, Yakubu Gowon, then a colonel, to power.

The three democratically-elected presidents since the return of democracy in 1999 – Olusegun Obasanjo, Umaru Yar’Adua and Goodluck Jonathan – are from the South West, North West and South-South geo-political zones respectively.

The Imo governor, who contested the presidential primaries of the APC in December 2014, but lost, demanded that the zone be allowed to produce a successor to Muhammadu Buhari, if he wins the February 14, 2015 election, since other zones have had a taste of power.

“It can never go back to the South West”, Mr. Okorocha said. “Northerners, please let me warn you, after 2019 and beyond, let nobody takes it to South West. Amaechi (governor of Rivers States), your brother (Jonathan) has taken your turn, never you, never you talk about South-South”.

In his remarks, Buhari assured that the party’s administration would not allow youth, notably able-bodied people, to be idle so that they would not become touts but become productive citizens.

He also assured that, if elected, his government would fulfil all the promises it was making to the people.

“I assure you, we will fulfil our promises if you give us the opportunity of being your leaders”, Buhari said.