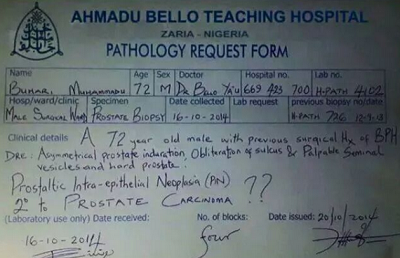 A statement from the Directorate of Media and Publicity of the campaign on Sunday said it is ludicrous for the PDP to throw all cautions to the wind in its shameless effort to pull wool over the eyes of Nigerians over their rising desire for change of guard at the federal government.

The statement, signed by the Director of Media and Publicity of the APCPCO, Garba Shehu, particularly directs the attention of Nigerians to the glaring errors on the letterhead paper conveying the purported medical report, which wrongly identifies the institution as Ahmadu Bello Teaching Hospital instead of Ahmadu Bello University Teaching Hospital (ABUTH) as the Zaria-based teaching hospital is known.

The statement reads: “The attention of the APC Presidential Campaign Organisation has been brought to the circulation of a fake medical record of General Muhammadu Buhari.

“We are able to track the circulation of the post on a social media platform and we know that the information emanated from the Facebook handle of one of Governor Ayo Fayose’s aides.

“It is noteworthy that the authorities at the Ahmad Bello University Teaching Hospital (ABUTH) have given a clean bill on General Buhari’s health status.

“It is also noteworthy for Nigerians to understand that the PDP will stop at nothing to cast aspersion on the person of General Buhari.

“We knew that the PDP would become unbridled at a point in its desperation to avert the defeat coming its way in the count down to the February 14 presidential election, but to anticipate that the PDP would go as dirty as spreading falsehood on an individual’s state of health could not have been imaginable.

“What is important is that Nigerians know today that our country is not healthy. They know that the PDP has driven the country to a near state of comatose. Our national security is very unhealthy and our national economy is right now gasping for breath from the stranglehold of the PDP. It is almost as if official corruption and impunity are matters of state policy in the management of our national economy under the President Goodluck Jonathan administration.

“That is why a great number of Nigerians yearn for change. Nigerians want a change from the clueless and directionless management of our security and our economy. Nigerians made a call on General Buhari to come on this rescue mission. They called on him because they know he is fit as a fiddle to fix our unhealthy economy and the insecurity that has consumed a large region of our land”.