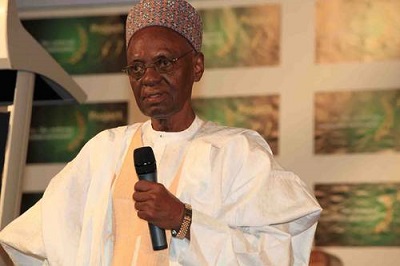 The family of Second Republic Nigerian President, Alhaji Shehu Shagari, has refuted a report that the elder statesman has endorsed President Goodluck Jonathan.

In a statement released by one of the ex-president’s sons, Muhammad Bala Shagari, the family reacted to a spurious report by a pro-Jonathan newspaper, which claimed that Mr. Shagari had endorsed the incumbent president while denouncing Muhammadu Buhari, the presidential candidate of the All Progressives Congress (APC).

“I’d like to inform the general public and concerned citizens of this country that the speech that was credited to His Excellency Alhaji Shehu Shagari, GCFR (Turakin Sokoto) by some media agencies and online news blogs in which His Excellency was reported to have endorsed President Goodluck Ebele Jonathan and commending his government for some achievements is nothing but a blatant lie. And we’ve condemned it in strong terms”, said the former president’s son.
http://www.newbalanceshoesinc.com new balance 903
He added: “It is pertinent to note that Alhaji Shehu Shagari is not a card-carrying member of any political party neither [does he] support the candidature of any politician. Alhaji Shehu Shagari was for long retired from partisan politics, he’s known for his proven integrity and [reputation as a] distinguished nationalist and elder statesman who treats every Nigerian/politician equally irrespective of his/her political party, tribe, ethnicity or religion.

“Therefore Alhaji Shehu Shagari has never ever issued any press statement [or granted] audience [to] any media agency to comment on the forthcoming elections or to speak of any politician, be it president or not.

“We therefore urge the general public to regard such publication as mere fabrications and concoctions aimed to tarnish the good image of Alhaji Shehu Shagari”.