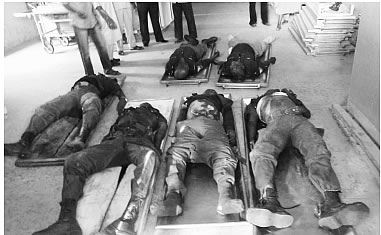 President Goodluck Jonathan’s Campaign Organisation, yesterday, accused the All Progressives Congress (APC) of insensitivity and opportunism over comments accusing Jonathan of not being serious about the security and welfare of Nigerians, citing the Ombatse killings in Nasarawa State as an example.

“We will not join the APC in the distasteful exploitation of the deaths of our security personnel for political gains,” the organisation said in a statement, yesterday, by its Director, Media and Publicity, Femi Fani-Kayode.

Fani-Kayode described the comment as another example of the “unconscionable insensitivity and crass opportunism of the All Progressives Congress, APC.”

“It also shows how the desperation of the opposition APC presidential candidate, General Muhammadu Buhari, for power has pushed his party’s campaign organisation into a frenzied search for any imaginable reason or ground to accuse President Jonathan of incompetence in the handling of security matters.

“The crisis that led to the death of the security personnel, in the first instance, was as a result of in-fighting within the political echelons of Nasarawa State, which is controlled by the APC.

“As is the case with the Boko Haram insurgency, after the APC has willfully exacerbated a dangerous security situation through its unguarded utterances and encouragement to rogue elements within its ranks, the party now turns around and tries to profit from further politicization of the fallout of a heinous deed in which it is complicit.

“This marks a desperate low for the APC and is tantamount to a new form of political voodoo, which involves trying to raise political capital and electoral sympathy from the deaths of our brave fallen security personnel. In view of this, we condemn in the strongest language the APC’s insensitivity and opportunism.

“The Federal Government had already established a mechanism to determine the immediate and remote causes of the unfortunate Ombatse killings. In addition, while nothing can replace the loss of a loved one, families of the fallen security personnel were compensated,” the organisation said.