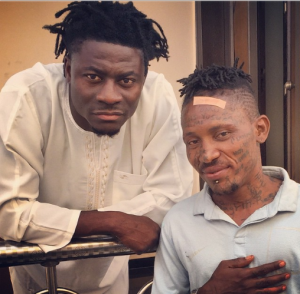 Nigerian Lil wayne is an old friend of Obafemi, they used to train and play football together in Lagos Island.

Unfortunately, Wasiu couldn’t reach the stardom, he became frustrated and moved into drugs.

According to sources, Wasiu is now a drug addict.

Obafemi reunited with his old friend, and sources close to them said, Obagoal is looking for a way to help him out.

See his full body posture below: –