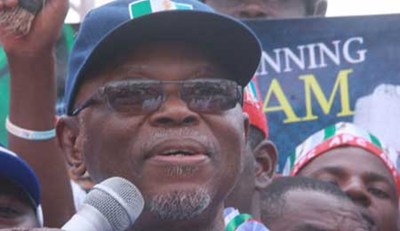 The All Progressives Congress (APC), yesterday, accused service chiefs of conspiring with the Presidency to postpone the general elections earlier scheduled for February 14 and 28, despite repeated guarantees that nothing would change the dates.

National chairman of the party, Chief John Odigie-Oyegun, said this at a press conference in Abuja, where he also alleged plans by the army to conscript its commanders across the country to rig the elections for Peoples Democratic Party (PDP), during a strategic retreat for the commanders that opened in Kaduna, yesterday.

According to him, the service chiefs had given assurance of their readiness for the election since last month, but suddenly changed tone after the National Security Adviser (NSA), Col Sambo Dasuki (rtd.), called for the postponement of the election.

“You will recall that on January 22, Dasuki, the National Security Adviser, NSA, at Chatham House, declared that INEC was not ready for the elections and he has therefore advised the electoral body to postpone the election.

“The reason he gave for his unsolicited advice was that substantial number of registered voters had not collected their PVCs,” Oyegun said.

“When the United States Secretary of State, John Kerry visited on January 25, he wanted a categorical commitment from President Jonathan that the elections would hold as scheduled.

“The President assured the American envoy that the elections would hold. Was it that his security chiefs had not briefed him on the security situation in the country and how this would affect the election time table at the time he was making this promise?

“On February 2, at the National Peace Committee meeting in Abuja with representatives of different political parties, the service chiefs gave assurances of their readiness for the elections.

“At the occasion, the Chief of Defence Staff, Air Marshall Alex Badeh, gave assurances of the Armed Forces’s preparedness for the elections.

“According to him ‘even though we are busy in the North-East, we also have capabilities across the nation.’

“Badeh also admitted that the role of the military is to support for the police in providing security during elections.

“At the same event, Chief of Army Staff, General Kenneth Minimah said ‘we are aware of the need for security, before, during and after the elections. We will deploy across the states of the Federation in areas we discover that have capacity for violence. We are prepared to ensure we have peaceful elections.’

“Also speaking at the event, the Chief of Air Staff, Air Marshall Adesola Amosun said ‘we have commenced the air lift of the materials needed for the elections, starting from Abuja. We will continue with the elections.’

“The sum total of all these is that only 12 days before the elections and despite the state of insecurity in the North-East, the entire military high command assured the nation of their readiness to provide security for the elections.

“However, only three days later, Friday, February 6, these same service chiefs wrote INEC a letter, which could be described as blackmail, saying that they would no longer be able to provide security for the elections.

“What happened in those 72 hours that brought about this complete volte face?

“It is also important to note that at the National Council of States meeting, Thursday February 5, INEC reaffirmed its readiness and commitment to hold the elections as scheduled.

“Although the service chiefs briefed the Council that they had security concerns, the consensus of opinion at the body of eminent citizens was that elections should go ahead nationwide, except in the 14 councils identified as problematic,” the APC chairman said.

INEC had over the weekend announced a shift in elections dates, citing security concerns. The new dates for the elections are March 28 and April 11, when the security situation is expected to have improved and would be conducive for the conduct of elections in all regions of the country.