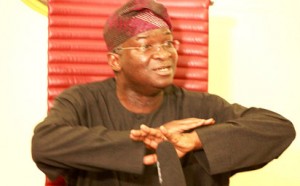 The Lagos State Peoples Democratic Pary (PDP) Governorship candidate, Jimi Agbaje, has said that Governor Babatunde Fashola of Lagos State lied again on his company’s tax. According to him, for Fashola to say that he has now paid N500,000 is a lie.

“There is no truth in this latest piece of misinformation that the Governor is spreading around. He lied again, giving the impression that my company paid money after his initial outburst and his first lie,” a statement by Agbaje said.

“JAYKAY PHARMACEUTICALS has not paid a kobo since the day Fashola launched his initial allegation. To say that I have now paid N500,000 is a lie. My company sticks to the facts contained in its initial publication, which encapsulated its reaction to the Governor’s initial falsehood.

“However, through his recent outburst this weekend, we get a clear picture of what his problem is.

“The fact remains that Mr. Jimi Agbaje has never stopped to acknowledge Mr. Fashola’s efforts at improving Lagos. But the result of all his efforts still remains that Lagos in the Economic intelligence Unit (EIU) is still ranked 137th out of 140 cities listed in the liveability index. This means that if you take 140 cities worldwide where people consider good to live in, Lagos is the fourth worst place to live in.

“Apart from this, a World Bank survey shows that of the 36 states in Nigeria, Lagos is still the worst state in terms of the ease of securing Building Permits.

“It is still on record too that the party Fashola represents has delivered less than 5,000 units till date.

“It is still on record that more students in Lagos fail WAEC than those who pass.

“Even when we consider corruption, we are aware that Governor Fashola is yet to challenge anyone for corruption at the state level. Or is he saying Lagos is 100 percent corruption-free? Yet he goes about castigating the government. He should walk his talk and lead by example –expose and prosecute high-ranking corrupt officials in his government and the state civil service.

“The corruption in the Lekki Toll Plaza will be made public in due cause.

“Clearly, Governor Babatunde Fashola has set out to exploit the commanding heights he occupies in the seat of government to bully us. And we shall stand up to bullies.

“It is quite illuminating that Governor Fashola is taking the issue of politics this personal and playing dirty politics.
What Lagosians should ask is what is driving Fashola’s violent outbursts? What has Fashola got to hide?

“Other than lay the facts bare to enable the public form an informed opinion, Jimi Agbaje refuses to be baited into Fashola’s self-declared verbal warfare.

“Agbaje has always maintained that his politics and his campaign will be issues-based, and no roforofo badmouthing from anyone, no matter how highly placed, will steer Agbaje away from development-based politicking.

“Mr. Agbaje comes squeaky clean, and no amount of lies, misinformation, disinformation and falsehood can impinge on the integrity of a man who made invaluable sacrifices in the struggle for this democracy.”