Home Metro News Fayose To Buhari: Swear By The Holy Quran That You Did Not...
Facebook
Twitter
WhatsApp 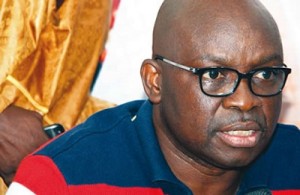 The issue about the health status of the All Progressive Congress (APC) presidential candidate, Mohammodu Buhari took a new twist, weekend, as Ekiti State Governor, Ayodele Fayose, who has been insisting that the former head of state was sick, challenged him to swear with the Holy Quran that he did not visit a hospital for medical attention during his visit to United Kingdom last week.

“I challenge Buhari to swear by the Holy Quran that he did not visit hospital in the United Kingdom last week,” Fayose said in a statement signed in Ado Ekiti by his Special Assistant on communication and new media, Lere Olayinka.

Fayose blamed the leadership of APC for not being fair enough to the nation by hiding the health status of their candidate.

“Buhari will never be Nigeria president again because some APC stalwarts want to ride on his back by seizing power at all cost.”

The governor also reacted to criticisms that he was wishing the former head of state dead. Fayose clarified that it was not so, but he was just trying to save the country from unnecessary embarrassment.

“I wish they can see spiritually what I am talking about that Buhari, despite the hullabaloo will never be president.

“I predicted my return as Ekiti State Governor and I am saying it again that Buhari will never rule Nigeria again.
‪
“After President Goodluck Jonathan, there will be a young element in his late 50s from the North that will be Nigeria president. I want to liken this revelation to the story of Elijah and Elisha. I am the Elijah while my followers are Elisha.”

“I owe it a duty to Nigeria and its people to expose the antics of the APC cabal whose only interest is to seize power to further their selfish interests.

“Without doubt, it is obvious that these cabal in the APC are trying so hard to deceive Nigerians on Buhari’s health status. That’s the reason they have been using photoshoped pictures to defend their lies on Buhari’s UK trip.
‪
“First, they used a March 5, 2013 picture, claiming that Buhari was taking a walk in London on Thursday. Later they came up with another poorly cropped picture of Buhari with former British Prime Minister, Tony Blair.

“The same people who lied in September 2012 that they received a gold card invitation to attend the Democratic National Convention in the United States of America are behind the robing of Buhari in the garment of lies.

“However, I want to disappoint this selfish cabal. Buhari is only raising their hope and that hope will be dashed.”