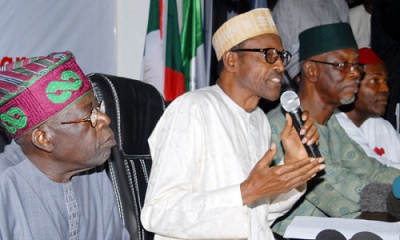 The President Goodluck Jonathan-led Peoples Democratic Party (PDP) is planning to use security agents to implicate some northern Muslim clerics and traditional rulers as having stolen permanent voter cards (PVCs) to rig the March 28 presidential poll in favour of Muhammadu Buhari, the All Progressives Congress Presidential Campaign Organisation (APCPCO) has alleged.

Director of Media and Publicity of the Organisation, Garba Shehu, said in a statement on Friday that the plan was for the federal government to shift the paradigm of public perception of corruption on it to the camp of the opposition (APC), by witch-hunting some northern Muslim clerics and District Heads as having stolen Permanent Voter Cards (PVC).

The statement said “If this clandestine plan is hatched like the use of the military to rig the polls in governorship election in Ekiti State last year, or the underhand treatment currently being given to INEC and other state institutions, we in the APC and majority of fellow Nigerian men and women would disbelieve it, resist it and question it till such an oppressive decision is rescinded and the anomaly rectified.

“Election must not be seen or taken as a do-or-die affair. Nigeria belongs to all Nigerians and the best hands should govern it. After all, the opposition has won elections in Senegal, Ghana, Sri Lanka, among others. Why should ours be an exemption?

“What President Jonathan and his party should learn from their multifarious campaign of malice and mudslinging, to which millions of state funds are daily being pumped, is that Nigerians are not buying their lies and they will voice out their anger through the ballot at the polls in March and April.

“No amount of cajolement or harassment can bottle the people’s power to elect their leaders. It is a constitutional right that not even the military has the power to remove. General Buhari is a man of proven integrity and honesty. These are the tangible and incorruptible attributes that endear him to the masses”.