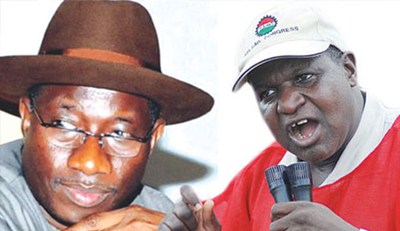 The Nigerian Government has called on the Nigeria Labour Congress, NLC, not to politicise the issue of security, saying the government was doing everything necessary to tackle insecurity in the country.

President Goodluck Jonathan made the appeal in Abuja on Monday while declaring open the 11th Delegates Conference of the NLC.

The theme of the conference is “The Working Class and the Challenges of National Security, Unity and Democratic Development”.

Mr. Jonathan, who was represented by the Secretary to Government of the Federation, Ayim Pius-Ayim, said the issue of insurgency would soon become history.

The President said the government would continue to collaborate and partner with the NLC to support their course.

Mr. Jonathan further stated that NLC should encourage the youth to be creators of jobs and not job seekers by setting up their own businesses rather than waiting for government jobs.

He, however, promised that the 2015 general elections shall be better than the 2011 elections.

The President urged the Congress to ensure that its election was peaceful, free and fair.

The Supervising Minister of Labour and Productivity, Tanimu Turaki, said Nigerian workers must remain in the struggle for the unity and peace of the country.

He said the administration of President Jonathan was working so hard to curtail the issue of security in the country.

He urged Nigerians to appreciate the work done so far by the President, stating that he gave unions in Nigeria the right to express themselves and nobody had ever been victimised.

The President of NLC, Abdulwaheed Omar, in his speech commended Nigerian workers for their support all through his eight years in office.

Mr. Omar said there was an urgent need for government to take decisive measures to stop the unemployment problem in the country.

He said Nigeria must promote a strong industrial policy that recognises manufacturing as a key engine of growth to overcome the problem of unemployment.

On the issue of security, he said that the rising security challenges threatened the sovereignty, unity and productive capacity of the country.

He, however, advised the delegates to continue to support and collaborate with the incoming executives of the congress.

The President, Trade Union Congress, Bobboi Kaigama, said labour movement believed that election should not be a do-or-die affair.

Mr. Kaigama called for more collaboration between TUC and NLC in formulating and executing policies for the Nigerian workers.

He assured the labour movement that NECA would continue to be committed to ILO declaration on fundamental principles and right at work place. (NAN)