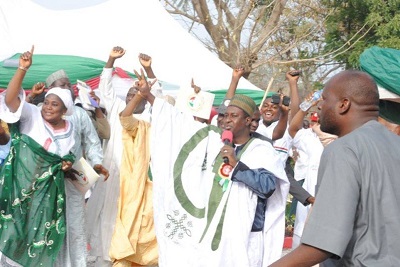 The Catholic Women Society, Kafanchan Diocese, have declared support for Gov. Mukhtar Yero of Kaduna State, ahead of the February 28 governorship elections in the state.

They made the declaration at the annual women conference of the diocese in Saminaka, Lere Local Government Area of Kaduna State.

Yero, who is contesting governorship election for the first time under the platform of Peoples Democratic Party, PDP, has former FCT Minister, Malam Nasir El-Rufai of the All Progressives Congress, APC, as his main challenger.

Declaring support for the governor’s election, the Chaplain, Zumuntan Mata, Kafanchan Diocese, Rev. Henry Boman, said the women hinged their support for Yero on the prevailing peace in most parts of the state under his leadership.

Rev. Boman said further that Yero had shown commitment to ensuring that Christians in the state practiced their religion under free and secured environment.

The Leader of the Catholic Women Society, Lady Angelina Tanko, thanked the governor for creating time to grace the event.

In his remark, the governor thanked the women for their show of support and pledged that his administration would continue to be fair to all citizens, irrespective of perceived differences.

He also tasked the women on the need to pray for peaceful conduct of the elections and sustained peace in the state and the nation in general.