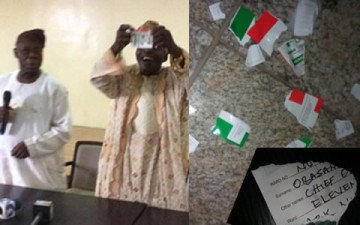 The Peoples Democratic Party, PDP, has said the exit of former President Olusegun Obasanjo from the party will help the party grow and garner wider support in the forthcoming general elections.

The party said the continued stay of the ex-president in the PDP would have been a liability and reduced the votes it expects in the March 28 and April 11 elections.

The National Secretary of the party, Prof. Oladipo Olawale, made the remarks while addressing journalists in Abuja on Tuesday.

Mr. Olawale said, “Baba is a very intelligent man. When Baba was helping us, he knows that a lot of people could have complained that they could have voted for PDP but Baba is there. You know when a big tree exits in a big forest, smaller trees cannot grow.

“If that big tree leaves, 10 to 20 smaller trees will grow. In politics one big tree has a vote, while 20 small trees have 20 votes. If you do the arithmetic, I am a scientist, I know that head or tail, it is a win-win situation for PDP”.

Reacting to Mr. Obasanjo’s decision to have his PDP membership card torn to shreds while announcing his exit from the party in Abeokuta last week, Olawale said the former president was merely helping the party to kick start what it had been planning to do.

He noted that what Mr. Obasanjo tore was an old and invalidated membership card of the PDP as the ruling party now has a new valid card signed by the National Chairman, Adamu Muazu, and himself.

“Baba is over 80 and my mother is around Obasanjo’s age and when you reach that age, you do things that only you can explain. Secondly, you will see that Baba did not tear our card.

“He asked somebody ostensibly to do the tearing and I am assuring you that the card that was torn was not the current PDP card. The current PDP is signed by Mu’azu and Prof Wale Oladipo. So the card he tore was a Barage card, which we were going to destroy anyway. So I think Baba started it”, he said.