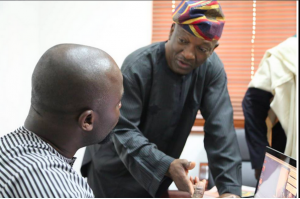 Lagos State Governorship candidate under the People’s Democratic Party (PDP), Jimi Agbaje has promised the people of the state that if elected, his government would empower and strengthen the Lagos Internal Revenue Service to collect tax, stressing that they are the right people to do the job.

A private consulting firm, Alpha-Beta allegedly owned by former governor and national leader of the All Progressives Congress (APC) Bola Tinubu has been said to be getting 15 percent of the internally generated revenue (IGR) of Lagos State from helping the state to collect taxes. However, Gov. Babatunde Fashola had while responding to calls for termination of the state’s contract with the company ahead of the 2011 election, said the consultant was not hired to collect the state’s IGR, but, specifically, to bring in innovation and technology, which he said had raised the state’s tax profile.

“We can’t have consultants forever. A model is needed that even when we use consultants,they transfer skills and leave,” said Agbaje in an online townhall session hosted by twitter-based news platform @NigeriaNewsdesk.

He described Alpha-Beta as one of the leaks in the system which needs to be plugged. “When we plug all the leaks in the current government and expand the tax net, our bold initiatives will be funded.”

Agbaje said the current administration in the state has done well in providing Bus Rapid Transit (BRT), but noted that it can be improved on. “…If we’re going to create a Mega city, transportation must work and work well for the people,” he wrote.