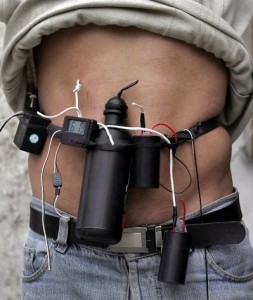 A suicide bomber, Thursday, blew himself up at a crowded bus station in Biu, in Borno state, on Thursday, leading to 18 deaths, AFP reports. However, another bomber was shot dead by soldiers before he could detonate his explosives.

“At least 18 people, including three women, died… and several others were injured,” Babagana Kyari, a civilian vigilante told AFP.

The attack happened after two men arrived the Tashar Gandu motor park in the town, before one detonated his explosives among passengers and vendors, witnesses said.

The two men in the latest attack pretended to be traders leaving Biu after business at the main market, which takes place every Thursday and Sunday, said Kyari.

“The two men came as if they were travellers and one of them detonated his explosives in the midst of travellers and petty traders,” the vigilante added.

“But the second man was shot and killed by soldiers before he could pulled the trigger.”

Resident Ali Dauda said the scene was cordoned off by soldiers and vigilantes, while they waited the arrival of the police bomb squad to defuse the unexploded explosives on the second attacker.

“The first bomber succeeded in detonating his explosives, which caused many casualties, but the second bomber was killed and his body is still lying at the scene with the explosives on it,” he added.

A series of attacks this week have almost overshadowed the recent gains by the military over terrorist group Boko Haram. This week alone, two suicide bombings have been recorded. 34 people were killed in a blast at a bus station in the city of Kano, on Tuesday. What would have been the third suicide attack this week, occurred hours earlier than the Kano bombing. |It also happened at a bus station and killed 17 in the commercial capital of Yobe state, Potiskum. However, it was not confirmed as a suicide attack.

No group has claimed responsibility for either bombing but Boko Haram has repeatedly targeted both places, as well as Biu.