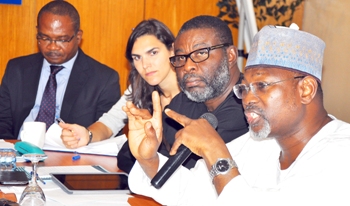 The Independent National Election Commission has allayed fears over the use of Permanent Voters Card (PVCs) and card readers at the general elections, which is less than a week away.

The Chief Press Secretary to INEC Chairman, Kayode Idowu, in an exclusive interview with SaharaTV, pointed out that the narrative of “PVC card readers has been misconstrued” by the media and political officials.

Mr. Idowu also gave reason why some of INEC’s tests of the card readers denied some voters cards. “Fake cards were brought, and the card reader did not read it [and these tests] were completely successful”.

The INEC chairman’s spokesperson explained that it is also false information to assume that the card readers could be hacked, saying “there is no computer system supporting the card readers at all. It is battery operated. It is like a point of sales terminal”.

The PVC readers, according to him, work off batteries for “for 12 hours at a time if fully charged. The commission also has more than 36,000 spare batteries which we can replace”.

Mr. Idowu also stated that “Chairman [Attahiru] Jega is totally focused and working hard” despite pressure from some politicians on President Goodluck Jonathan to remove him before elections.

He also sought to address rumors that PVC distribution was deliberately marginalizing certain areas of Nigeria. “There is nothing that indicates one area in Nigeria is getting preferential distribution of PVC…the same arrangement for people to collect PVCs is the same everywhere”, he said.

Mr. Idowu concluded by saying “I can assure you that INEC is prepared. Since the rescheduling, INEC has done much more and we are at a comfortable level. There is firm assurance that we are headed for a resoundingly successful election”.