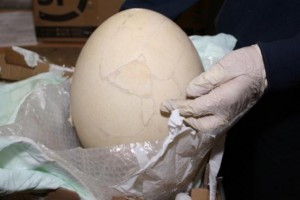 Customs officials in Italy said they have seized a large “elephant bird” egg fossil that a man attempted to ship to the United States. UPI has more:

Officials said customs officers at Bergamo Airport examined the Los Angeles-bound package, which had a declared value of about $550, and discovered the giant prehistoric egg worth an estimated $100,000.

The customs agency said the fossil is believed to be the egg of an Aepyornis maximus, also known as an “elephant bird.” The giant kiwi-like creatures, which could reach 10 feet tall and weigh more than 1,000 pounds, lived on the island of Madagascar for millions of years until they were wiped out by hunting about 300 years ago.

The customs agency said the man has been reported to prosecutors.

The sender, identified only by the initials CC, said his wife is from Madagascar and he had received the egg as a wedding gift.