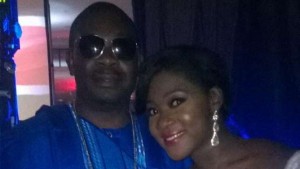 I saw Mercy Johnson at the AMVCAs and she was looking stunning as usual; big in all the right places.

The veteran Nollywood actress has revealed that she intends on going into the music business.

The actress who has starred in several hit movies said super producer Don Jazzy will be on her soon to be released single.

Mercy Johnson went on her Twitter page to break the news and even posted a picture of her and the Mavin Boss together at the AMVCA that held on Sunday, March 8, 2015.

She tweeted “With @DONJAZZY at AMVCA…watch out for my single…its Don Jazzy again!” Don Baba Jay then retweeted the actress’ tweet and added “Osheee Tell em“.

No further information has been revealed about Mercy Johnson’s music career.