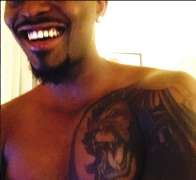 It seems like Nigerian celebrities have developed a renewed love for tattoos.

The father of one got a huge tattoo of a lion that extended from his chest to his arm.

You would recall I also wrote about Nollywood actor, Jim Iyke’s new tattoo he got in Canada.

Other artistes who have chest tattoos are Sean Tizzle and Shank.