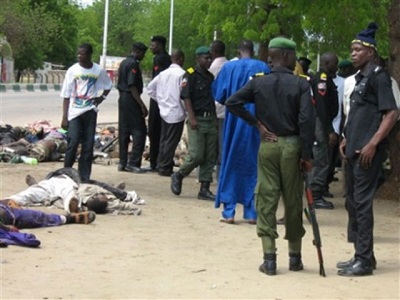 A witness, whose parents were killed in the attack, said the gunmen struck after the soldiers had moved one set of people from the hills around Gwoza, where they had been taking refuge from the terrorists’ attacks.

The witness said before the soldiers could go back for the remaining people, “some Boko Haram members attacked them and slit the throats of 12 people”.

A comprehensive counter-insurgency operation by Nigerian troops, supported by their Chadian, Nigerien and Cameroonian counterparts, had successfully pushed members of the sect out of most of the areas they had controlled before now, reducing significantly, their operational capabilities.

Gwoza was one of the last places recaptured from the terrorists by the troops, but handful of violence are still reported in some areas in the northeast.